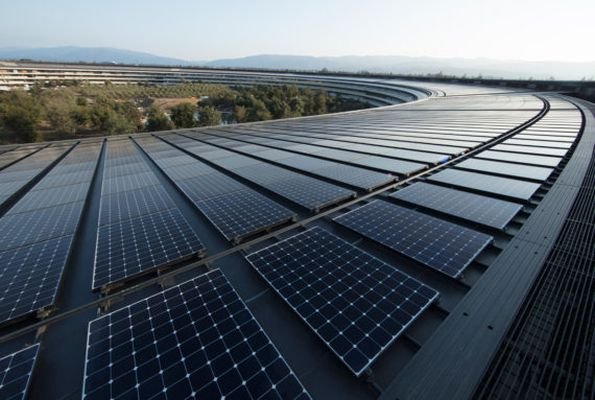 After Google now Apple announced today that its global operations are now powered by 100% renewable energy after years of work in 43 countries around the world.

The news comes as the culmination of years of effort by the consumer electronics behemoth in its push to combat climate change and create a healthier environment. Apple’s announcement means that all of its data centers, retail stores, offices and co-located facilities in 43 countries around the world are now 100% powered by renewable energy – truly a feat worth celebrating.

The journey to 100% renewable energy has taken years, with a slow progression of solar installations, wind farm energy contracts, and new facilities starting up on 100% renewables like its high-tech 400,000-square-foot data center that is on track for startup in 2020 in Waukee, Iowa.

Apple is stretching beyond the borders of its own properties with a push to clean up its supply chain through a program dedicated to encouraging its upstream manufacturing partners to power their operations with renewable energy. Apple’s announcement today comes bundled with news that another 9 manufacturers have committed to powering their Apple-specific production with 100% clean energy, which takes the total number of suppliers in the program up to 23.

Acknowledging that the move to 100% renewable energy takes time and significant effort, Apple established the Apple Clean Energy Portal, which is an online platform that the company developed to help suppliers identify commercially viable renewable energy solutions in regions around the world.

Apple’s renewable energy projects around the world amount to a staggering 626 megawatts (MW) of generation capacity, with 286 MW coming from photovoltaic solar production that came online in 2017 alone. Another 15 projects are in construction which, when complete, will bring its portfolio to 1.4 gigawatts of renewable energy generation in 11 countries.

The iconic Apple headquarters in Cupertino, California, was built with renewables in mind from day one, with the roof of the building covered in a 17 MW rooftop solar installation that is paired with 4 MW of biogas fuel cells.