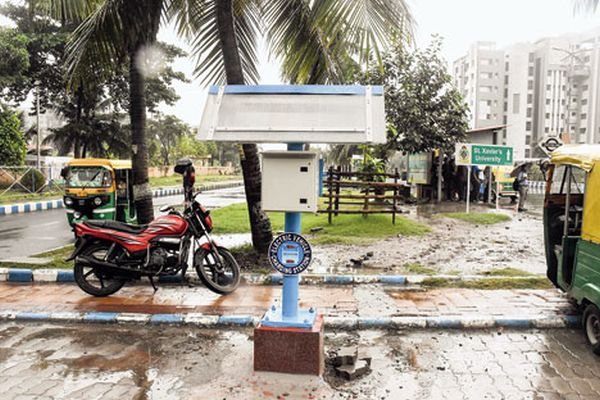 New Town Kolkata Development Authority (NKDA)  under the initiative by HIDCO, has made sure that public gets an option to charge their el,ectric vehicles on the go.

As many as 10 charging docks have been set up in all three action areas of the township. The density of e-vehicle- users in New Town is higher than other parts of the city.

The charging stations are mostly located at public parking lots for the benefit of the owners, who can get their vehicles charged while remaining busy at work.

The stations, designed by NKDA engineers, have two types of universal charging points to enable any e-vehicle to get charged. Each station has a circuit-breaker which stops charging during an emergency.

The stations have come up near the Rabindra Tirtha intersection, adjacent to the Kolkata Gate, the parking lot near Tata Medical Center and the Eco Park parking lots near gates 1, 4 and 6, among other places.

There are also three heavy duty charging stations located at the bus terminal near Pride Hotel, AA3 bus-stand near Sukhobristi and Eco Urban Village in AA2, for running the electric buses.

Most e-vehicles run more than 100km on a single charge. Some like the Mahindra e2O and the e-Verito can run a few more kilometres even after the battery dies.

“Battery-powered buses now ply on the New Town roads. These charging points will now make battery-driven cars and bikes more popular,” said an official of the NKDA, the administrative body of the township.