Parrotfish in Andaman Are Under Threat… 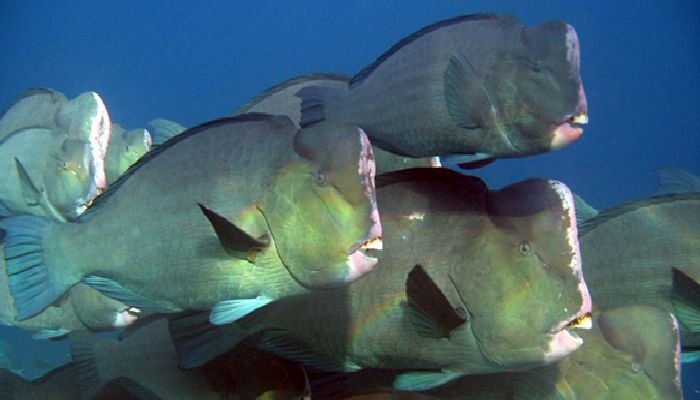 Bumphead parrotfish, Bolbometopon muricatum, is an important component of coral reef ecosystem, but is highly endangered globally. It is categorized as ‘vulnerable’ in the Red List of the International Union for Conservation of Nature (IUCN).

This fish is highly prized resource, but is threatened due to limited knowledge about its distribution and abundance in Indian waters.

Now a group of researchers have studied the distribution, abundance and dangers to this species in the waters of Andaman and Nicobar islands.

The team carried out underwater visual census, during November 2013 and April 2015, at a total of 75 reef sites across 51 islands of Andaman and Nicobar islands.

The study reports that the presence of a protected area, live coral and algal cover, significantly influenced the distribution and abundance of B. muricatum. Incidental catch by fishers and degradation of coral reef habitats are two potential threats to the species.

A large body size, aggregating behaviour and limited activity at night make B. muricatum an easy target for spear-fishers. Combined with slow growth and low replacement rates, this has resulted in population declines across the Indo-Pacific and Red Sea regions.

The findings suggest the necessity to ban night fishing for the species and to implement regulations regarding reef fishing.