The Big Dirty Secret: Wind Blades Can Not Be Recycled 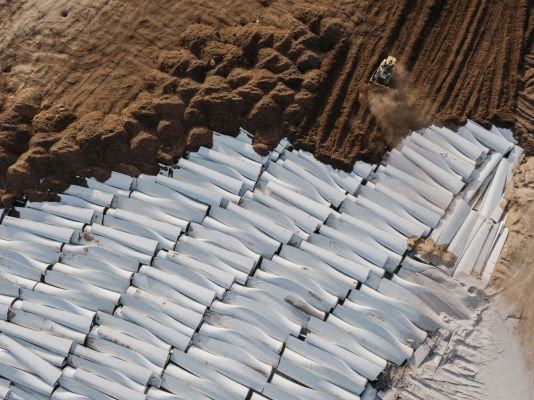 We know wind power is generated via massive fiberglass blades, each of which can be longer than a Boeing 747 wing. Built to withstand hurricane-force winds, the blades can’t easily be crushed—or recycled or repurposed for that matter.

It’s a curious conundrum: Tens of thousands of blades must be replaced each year and most have nowhere to go but landfills. But first, you need to saw through the lissome fiberglass using a diamond-encrusted industrial saw to create three pieces small enough to be strapped to a tractor-trailer.

The municipal landfill in Casper, Wyoming, US, is the final resting place of blades whose days making renewable energy have come to end. The severed fragments look like bleached whale bones nestled against one another.

In the U.S. alone, about 8,000 will be removed in each of the next four years. Europe, which has been dealing with the problem longer, has about 3,800 coming down annually through at least 2022.

It’s going to get worse: Most were built more than a decade ago, when installations were less than a fifth of what they are now.

Wind power is carbon-free and about 85% of turbine components, including steel, copper wire, electronics and gearing can be recycled or reused. But the fiberglass blades remain difficult to dispose of.

With some as long as a football field, big rigs can only carry one at a time, making transportation costs prohibitive for long-distance hauls. Scientists are trying to find better ways to separate resins from fibers or to give small chunks new life as pellets or boards.

Until then, municipal and commercial dumps will take most of the waste, which is safest and cheapest.