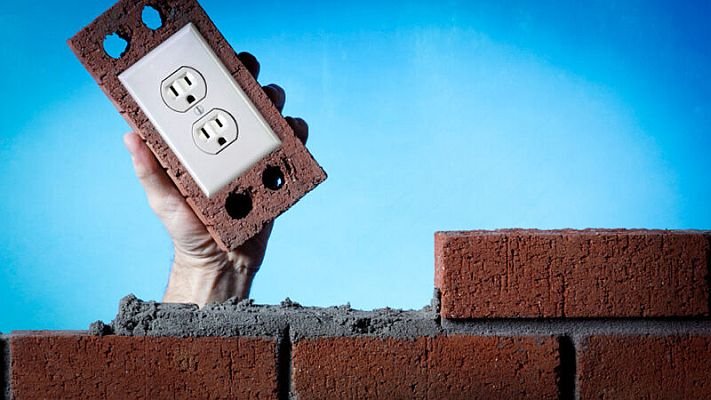 A team of researchers at Washington University in St Louis have figured out a way to turn regular red bricks into batteries. They did it by filling the pores of the brick with tiny conducting nano-fibers of plastic (PEDOT) that can store a charge. In early tests, the bricks were capable of powering a small LED light.

Brick has been used in walls and buildings for thousands of years, but rarely has been found fit for any other use. Now, chemists in Arts & Sciences have developed a method to make or modify “smart bricks” that can store energy until required for powering devices.

A proof-of-concept published Aug. 11 in Nature Communications (and pictured below) shows a brick directly powering a green LED light.

While some architects and designers have recognized the humble brick’s ability to absorb and store the sun’s heat, this is the first time anyone has tried using bricks as anything more than thermal mass for heating and cooling.

A solar cell on the roof of a house has to store electricity somewhere and typically we use batteries. What the team has done is provide a new ‘food-for-thought’ option, but we’re not there yet.

As of right now, compared to a lithium ion battery, the power brick only has one perfect the energy density. The researchers are hoping to increase this tenfold by using metal oxides.

To make their power bricks the construction material of the future, the researchers would also have to figure out a way to make them weatherproof and insulated.