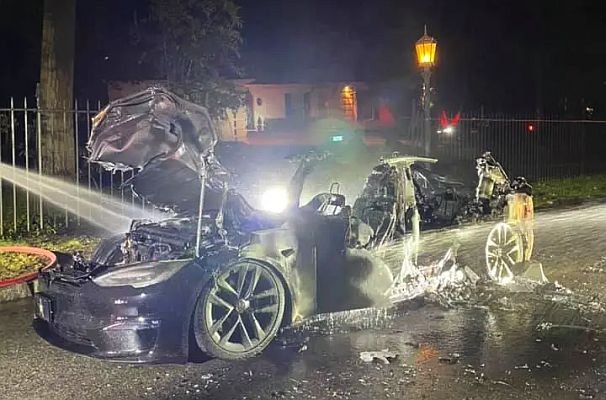 A brand new Tesla S Plaid was been destroyed in a fire in Gladwyne, Pennsylvania on June 29, 2021 around 9PM. Fortunately, no one was killed or injured. Also, the cause of the fire is still under investigation.

The vehicle, a black Tesla S Plaid was fully engulfed in flames when the Gladwyne Volunteer Fire Company, firefighters, arrived. The crews had training on Tesla vehicle fire emergencies and quickly took action.

They set up a separate water line to provide a continuous stream of water on the battery — making sure the fire was completely extinguished. Firefighters were there for over three hours and after the fire was put out, only the front, rear, the new Arachnid wheels, and the Plaid badge were recognizable.

CNBC reported that when the vehicle caught on fire, the owner was actually behind the wheel. Reuters reported that the owner of the Tesla S Plaid was an “executive entrepreneur” and that he wasn’t able to get out of the car. The electronic door system failed and the owner had to use force to push it open, according to the attorneys.

A spokesperson for the National Highway Traffic Safety Administration said they were aware and are in touch with the relevant agencies and Tesla. If data or investigations show a defect or an inherent risk to safety, NHTSA will take action as appropriate to protect the public.