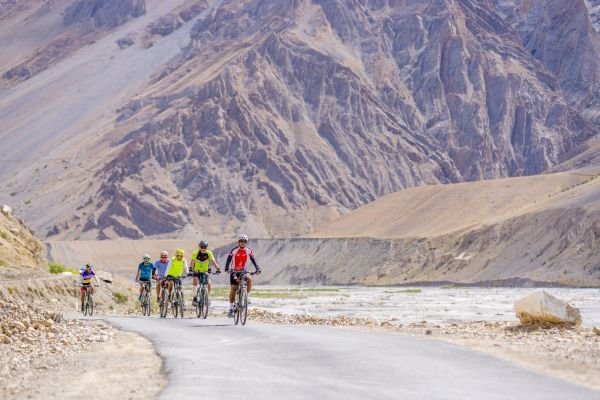 The threat of climate change is looming large on the world. It is staring at us with projection of 1.5 degree rise in average global temperature in the next 5 years.

The manifestation of this climate change is already being witnessed by us in terms of extreme weather events – heat waves, cold waves, extreme rainfall, landslides, flash floods, droughts, famines, melting of permafrost & glaciers, submerging of islands, extinction of flora & fauna, in further coming years. The future seems to be further grim.

Hence, seven leaders from various private and government organizations in India decided to make better use of their bicycles, rode 500 km + across the Himalayas, meet the local heroes and community leaders, and send a message to their countrymen that ‘Climate Action needs their immediate attention’.

All the leaders gathered in Shimla and commenced the historic ride on 5th September 2021.

The leaders cycled all the way upto 14900 feet in Himalayas, traversing a herculean 500 km + distance as part of “CtrlS India’s Leaders Ride 2021”, interacted with local heroes and community leaders to understand and highlight the plight of the environment in Spiti – a cold desert and one of the most fragile ecosystems in Himachal Pradesh, while facing the brunt of climate change themselves.

Spiti region was chosen for the ride because it is a region that very few people know about and yet it is facing issues that are a result of activities of all of us living in cities.

Komic which is one of the highest and most beautiful villages in the world, is facing acute water crisis. And because of the melting glaciers, the snow leopard found in Spiti is losing its habitat and might be on the verge of extinction in coming years. It is high time that we hear and acknowledge the wake-up call sounded by the nature.”

This is the first one of multiple such cycling expeditions planned across the Indian subcontinent, for supporting the cause of climate change.

This is a PR Feed ; edited by Clean-Future Team