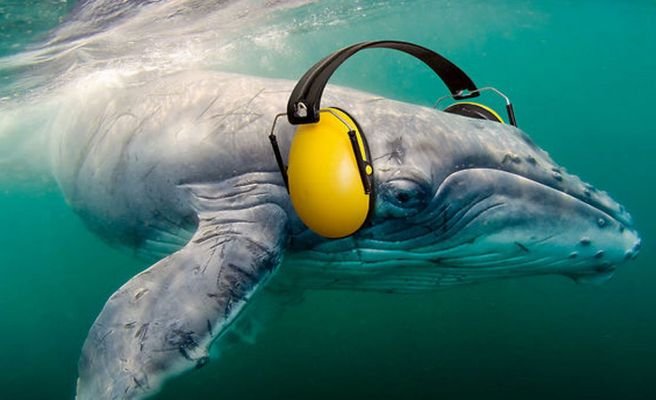 The ocean soundtrack of the popular imagination is a largely silent one, interrupted only by the mournful aria of migrating whales or the acapella vocalizations of dolphin pods. Until modern humans brought their leaf blowers…

Over the past couple of hundred years, humans have progressively altered the ocean soundtrack with the introduction of shipping, industrial fishing, coastal construction, oil drilling, seismic surveys, warfare, sea-bed mining and sonar-based navigation.

Until recently, underwater sound pollution had not attracted the same attention as its terrestrial equivalent.

Now, a new paper titled “Soundscape of the Anthropocene Ocean” lays out the repercussions, demonstrating that noise pollution can be just as harmful to the ocean environment as other kinds of pollution.

Lead author Carlos M. Duarte’s, distinguished professor at King Abdullah University of Science and Technology (KAUST), team of global researchers combed through more than 10,000 scientific papers on the subject of marine sound and its impact on wildlife.

The team found an overwhelming evidence that anthropogenic, or human-caused, noise negatively impacted marine fauna and their ecosystems, disrupting their behavior, physiology, reproduction and, in extreme cases, causing mortality.

However, unlike all of the other stressors, like warming or chemical pollution that will take years to fix, the moment we switch our noise off the impact disappears.

Rebound and recovery would be nearly instantaneous, Duarte says, pointing to marine life surveys conducted around April 5, 2020, when 60% of the world’s population was under some form of lockdown. Ocean noise, he says, went down by 20%.

“We started seeing marine life return to once-busy waterways where they had not been seen before. That 20% was enough for a remarkable, almost instantaneous response of large marine animals coming closer to shore and claiming back their ancestral territory,” he added.

There needs to be a policy that mandates acoustic mitigation in the marine environment. We have noise standards for cars and trucks, why should we not have them for ships?”

Reduce the noise, and marine life will be able to better withstand everything else.