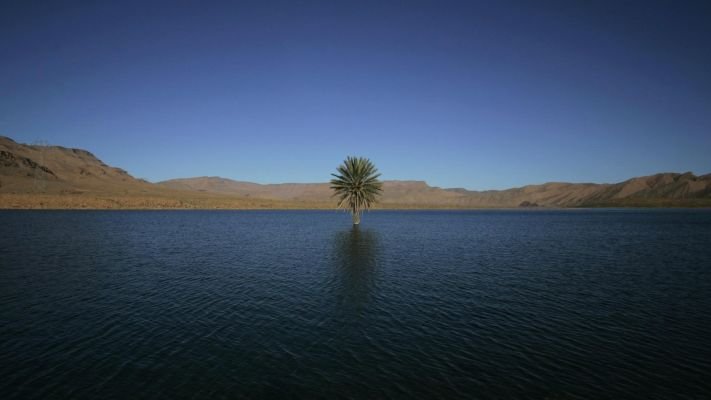 In our efforts to go green, we need to be mindful of consequences, both intended and unintended – and that includes how a mass deployment of renewable technology might affect its surrounding climate.

For instance, What if the Sahara desert was turned into a giant solar and wind farm?

This is the topic of new research published in Science by Yan Li and colleagues. They found that all those hypothetical wind turbines and solar panels would make their immediate surroundings both warmer and rainier, and could turn parts of the Sahara green for the first time in at least 4,500 years.

The scientists behind the research looked at the maximum amount of solar and wind energy that could be generated in the Sahara desert and the transition region to its south, the Sahel.

As the two regions are so large, the solar and wind farms that were simulated in this study are the size of entire countries – 38 times larger than the UK.

This would prompt quite significant changes in the local environment – massive wind farms would raise temperatures by around 2℃ for instance, similar to the amount of global warming we are concerned about. Solar would cause a smaller temperature change, around 1℃.

Wind farms largely cause temperature increases because their turbine blades bring warmer air down to the surface, especially at night. This has been observed in field studies and using remote sensing. They have also been shown to increase moisture in the air.

Solar panels mean more solar radiation is absorbed and less of the sun’s energy is reflected back into space. This causes the land surface to warm up.

In the Sahara simulation, extra rainfall happens because wind turbines represent an obstacle to free-flowing air, slowing it down and reducing the effect of the Earth spinning on air flow.

Time to make it a reality?

Not quite. Decisions aren’t made in response to environmental impacts alone – if this was the case we’d have already ditched fossil fuels. It’s certainly true that developing a mega renewable energy site across the Sahara and the Sahel would be a game-changer, but there are lots of other factors to consider first.

We can’t simply ‘grab’ the land to supply energy to Europe and the Middle East?

Overall, this is an interesting and important piece of research, highlighting the need to be mindful of unintended consequences, be these positive or negative, of the energy transition.

Integrating these findings with other social, economic, environmental and technical considerations is essential to ensure we don’t leap from the frying pan into the fire.